Those who know the TruTravels family will probably know that our favourite past time is hitting the dance floor and generally not leaving until the sun has come up. However, when we’re not setting the party alight with our epic shapes and masterful footwork, we do like to dabble in the odd activity around the island (remember, Koh Phangan is not just about the Full Moon!). We have started documenting some of these trips in our new highly informative and entertaining vlog series: ‘TruReviews’ – that’s right, blogs with videos! How high tech are we?! Our newest instalment of amazing took us to the chilled out north of our island home (Koh Phangan) to a part of the island named ‘Chaloklum’ which is a very cool traditional fishing village which is still very much run in the traditional Thai way – something that can not be said for other parts of the island or even some whole other islands like Phi Phi which now have more western businesses than Thai.

The north of the infamous party island of Koh Phangan is a vast contrast to the image most conjure up in their head prior to visiting. The calm crystal waters are bordered by uncrowded, white sand beaches and luscious green jungle littered with big ass granite boulders which have sat there for a long long time… seriously, it’s ‘Postcard Thailand’ kinda stuff. There is not much in the way of a party scene, that is taken care of towards the south of the island but the north does have plenty to offer including lovely resorts, breath-taking scenery, great restaurants and some cool activities like yoga, archery, slip ‘n fly, mini golf, muay Thai, and water sports. The latter is why we headed up north on this glorious Wednesday morning.

We drove up to Chaloklum for around 10am to meet our new pal Jamie, the owner and operator of the first Wakeboarding School on the island, “Wake Up”. Hailing from sunny Staines in the UK, Jamie set up home here 10 years ago after realising there really isn’t that much opportunity for his passion of Wakeboarding in his home town and that Chaloklum was just slightly a slightly nicer place to live and board. Nowadays Jamie has two nice speed boats and the most popular Wakeboarding School on the island, we were lucky enough to go out with him on his awesome new MasterCraft Wake Board boat for a few hours to test our skills on the water.

As you will be able to see from the video only one of the TruTravels Family members present had ever wakeboarded before. So, whilst myself, Holly and Joe were slightly apprehensive about our level of competence on the water, Matt being from Canada where apparently most households have cabins by lakes and boats is of course a seasoned pro and could not believe his ears when he heard that none of us had attempted it before. That being said, we were all super excited to get into the water and give it a go. It’s just that some of us weren’t as confident that we’d be able to stand up, let alone start shreddin’ up some wake!

The water up in Chaloklum is perfect for all things water sports, it is extremely calm most of the time (especially compared to the beaches round to the East which get the brunt of the Easterly winds from the Gulf of Thailand. Happily the bay in Chaloklum shelters the water from the majority of the winds and waves leaving residents with nice, flat, pond-like water to play on. Indeed the calmness of the water here is one of the main reasons Jamie decided to set up in Chaloklum. The day we picked to go up and give it a go was another calm day and the water glistened a blue green colour whilst we drove out and readied ourselves for our first lesson in Wakeboarding.

It was Luke up first (one of the least athletic members of the crew) and it wasn’t exactly the best first attempt ever but following an entertaining face-plant, Jamie showered him with some words of wisdom and explained that ultimately most males want to pull themselves up using their upper body strength (in true macho style – example below), where actually the real trick to Wakeboarding is letting the boat and the rope do the work for you and ultimately letting your hips and back foot guide you across the wake of the boat. After explaining very patiently that if I carried on pulling forward with my arms, I would carry on falling forward on my face, Jamie span the boat round for attempt number two!

Low and behold after a few goes broken up by of Jamie’s coaching and wise words Luke was up on his feet and tearing his way to becoming a f**king uber Wakeboarding master. Who’d have guessed it? I have heard that there are now rumours on the pro circuit that he could be challenging the world rankings very soon! Seriously though, he was up and tearing in a matter of minutes, and much to everyone’s surprise, got the hang of it very quickly and had a number of really long and really fun rides.

Next up was our very own videographer extraordinaire and Canadian action man, Matty, who jumped in and immediately proceeded to tear it up and make the wake his b**ch….. What a prick!

After Matt made us all look stupid it was then little Holly’s turn to strap her feet into the board and give it a go, Holly much like her other half Luke, was pretty useless on her first…andsecond….and third attempt, but even though she doubted herself Jamie again patiently coached her to the point where she too was standing up and skimming behind the boat with ease in no time! The day was starting to look like a success!

Joe followed, and the same story ensued, he fell on his face a good few times before getting thehang of it and ripping shit up. By the end of our first ever go, we all managed to stand up and tear around for as long as our arms & legs could carry us and were each on our way to becoming Wakeboarding masters in our own right.

Once we were all up and riding the wakes we tried it out with two people off the boat at the same time so Matt could get the GoPro out and start getting some cool footage whilst riding the wake (and some close ups of us bailing which were just as likely to make it into the final video!!). This is where it started to get really fun as we were all much more confident and due to the fact there was two of us riding at the same time, we actually had to have some control of our direction to avoid smashing into each other and to try and manoeuvre into decent positions for the camera.

When we weren’t being dragged behind the boat at high speeds, we were chilling on the boat listening to some tunes and chatting with Jamie about how his business came to be and continued to do so well. He started off around 10 years back with just one small boat teaching a mixture of backpackers who stumbled across “Wake Up” and were keen to try the sport out for the first time and more dedicated riders who had found out about them before coming to the island. He still teaches a mixture of people and reckons that his clientele now days is made up of around 70% beginners who want to give it a go and are probably on the island for another reason such as Full Moon (#ItsNotJustAboutFullMoon!). These guys sometimes just come for a few lessons and sometimes stay for prolonged periods to really hone their skills on the wake, by the end of their time with him Jamie explained that most of the longer term students can pull off jumps and tricks galore and are completely in love with the sport, and in most cases will come back and join him next season. If they do, they then fall into the other 30% of students who already know of “Wake Up” and come to Jamie with the intention of staying on the island for a while and hitting the wakes hard!

After a good 3 hours out on the boat and our arms & legs (and some muscles we didn’t know we had) aching, we decided to call it a day and head back to the beach for an ice cold beer and to check out the footage from the cameras, which involved a whole lot of people falling over (as you can see in the video). After our day with Jamie on the boat we were in no doubt that Wakeboarding is something that everyone needs to give a go if given the chance, so we gave Jamie a big high 5 and have started offering an ‘Introduction to Wakeboarding Top Up’ for all our TruTravellers, you can check it out on our Top Ups page on our website.

See you on the beach / wake x 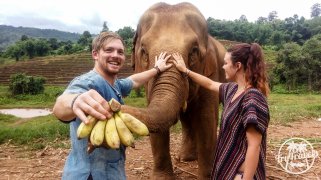 5 Things to do in Chiang Mai 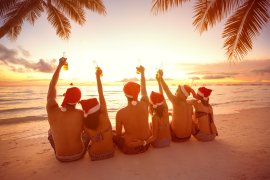 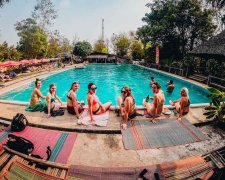 10 things you can buy for under £2 in Thailand
X
Our website uses cookies to ensure you have the best possible experience and to deliver epic content specific to you. We also share info about your use of our site with our social media, advertising and analytics partners. By continuing to use our awesome website, you consent to our us of this technology. Have a read of our Privacy Policy to learn more.
I'm OK with this Cookie Settings ?