Cambodia: Our Guide To The Real Kingdom

Quietly tucked in between two of the largest cities in Southeast Asia, Cambodia is a hidden gem bordering Thailand on the east and Vietnam in the west. It should not be over-looked by backpackers seeking a version of Southeast Asian culture with a little more rawness.

Cambodia's rich and dark history has made the people resilient and proud while its culture and landscape have made it beautiful. From rolling white sand beaches and crystal blue waters, to the wonders that are the ancient temples of Angkor Wat, Cambodia may be relatively small but this country offers so much.

Land in Phnom Penh for the first time and even if you’ve experienced Bangkok or Saigon you’re still almost guaranteed to be in for a culture shock. Tuk tuks and motorbikes drastically outnumber cars and every street, at first glance, looks like the last. The same old buildings seem to go on for miles. The honking of horns in the blistering heat of traffic, coupled with the smells of small local restaurants and food carts offer your senses a new and exciting experience. The first thing one might notice is how slow the pace of life is for such a big city. Most of the locals you’ll deal with are fun and easy-going, but you’ll have to haggle to get a good price on most goods and services. However, it’s a game that the Khmer people are happy to have fun with and do with a smile on their face. 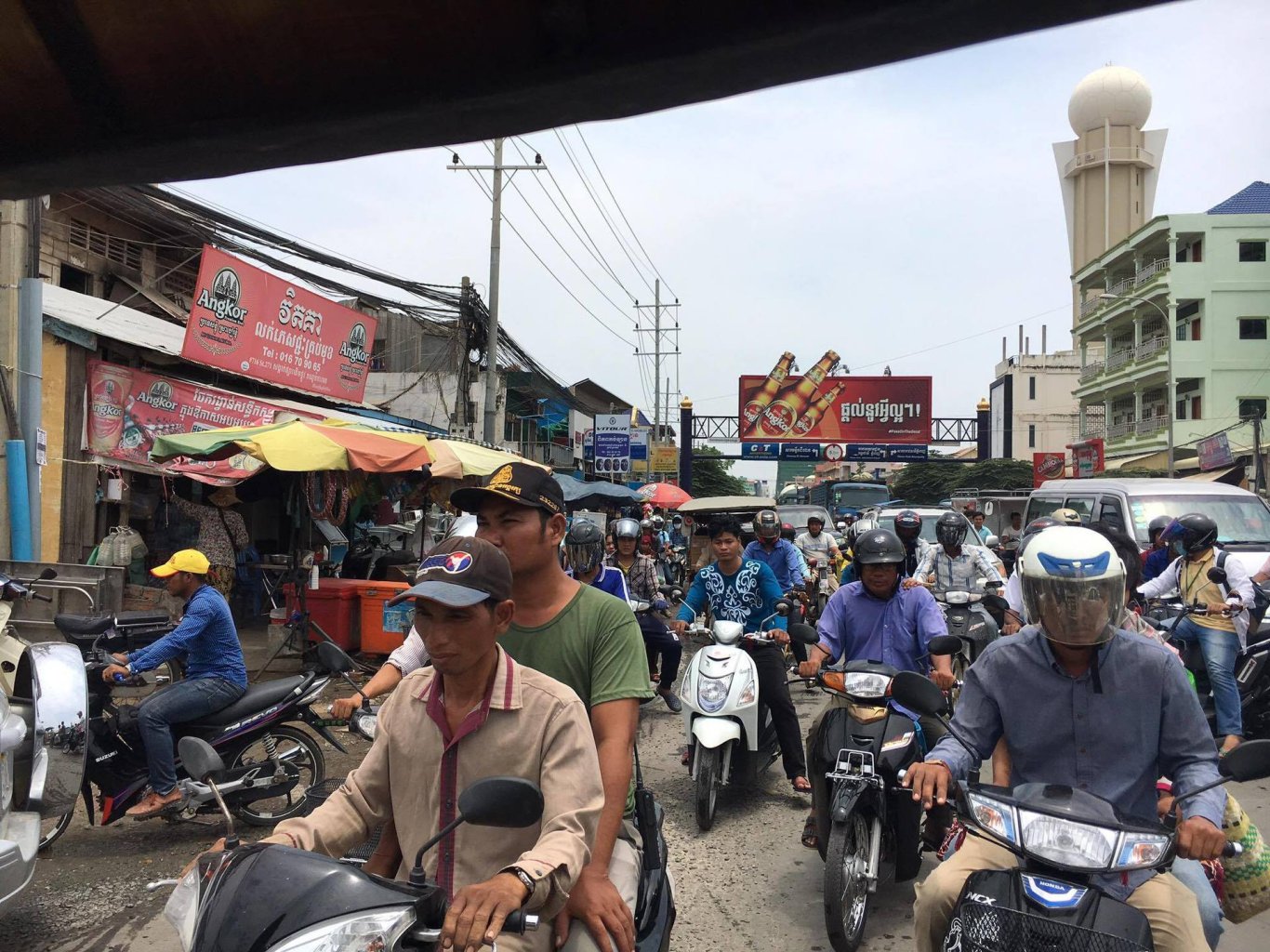 The capital city is home to some of the world’s darkest history. Between 1975 and 1979, the radical communist Khmer Rouge party led by the notorious Pol Pot, executed roughly 2 million people in hopes of creating a utopian agrarian society. Two of the most important historical sites in the country are within the limits of Phnom Penh.

The Killing Fields beautiful appearance and quiet serenity starkly contrasts the terrible atrocities committed there less than 40 years ago. Most people take the self-guided audio tour of the site, but eerily when you pause the audio and take off the headset, you’ll hear nothing but the songs of birds. 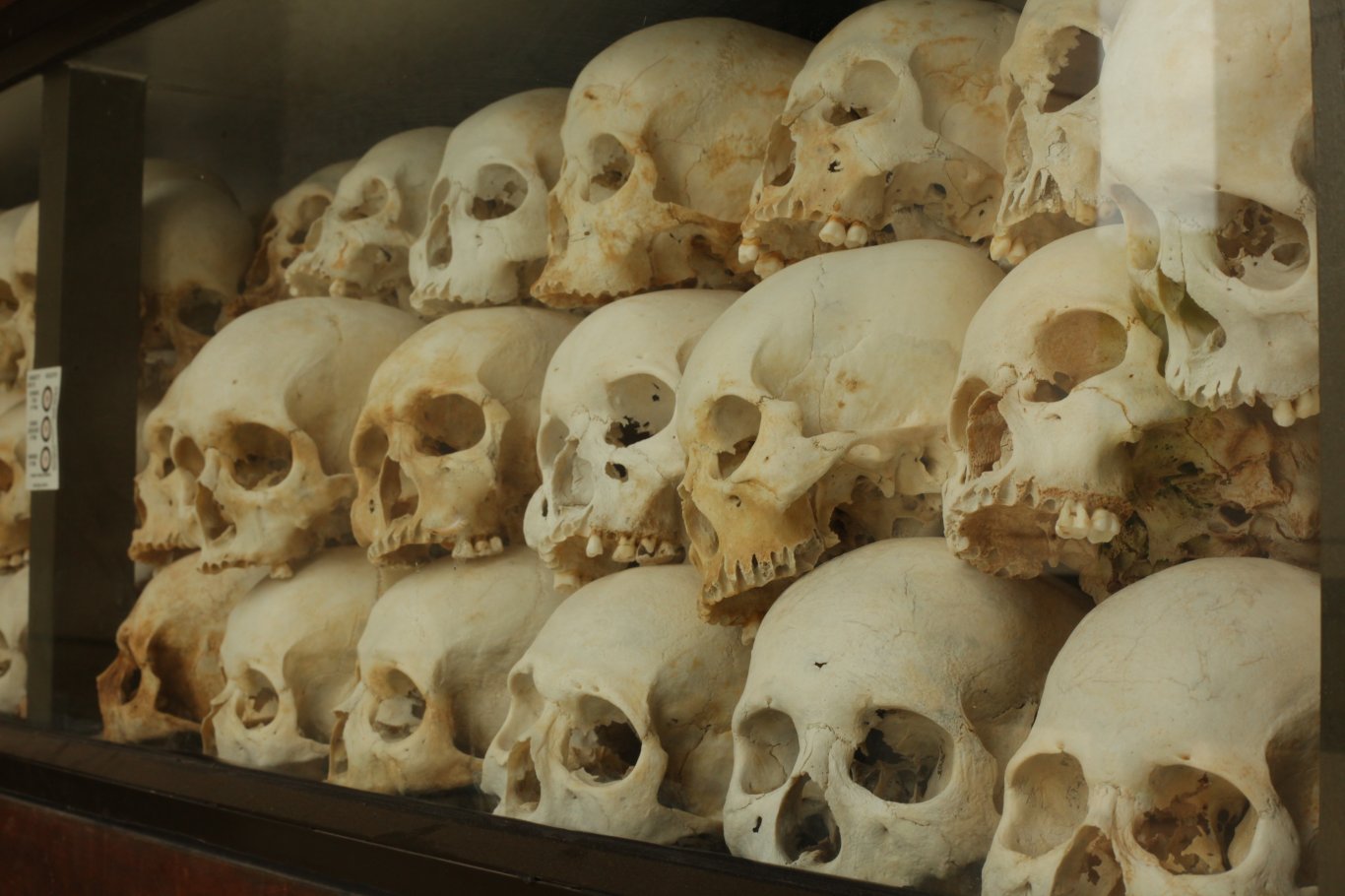 Tuol Sleng, a former high school turned into a prison camp held and tortured over twelve thousand people, though some say it could have been up to twenty thousand. All but seven prisoners eventually died or were sent to the Killing Fields to be executed. Visitors of the so-called S21 Genocide Museum can expect to see pictures of prisoners, some badly beaten and walk through the rooms which were literal living nightmares for those who dwelled in them during the Khmer Rouge regime.

It might sound disturbing but much like Auschwitz, thousands of tourists and Cambodian people flock to these sites every month. It’s no one’s happiest memory of their time in Cambodia but it’s usually one of the most important. Many tourists don’t know much of what happened in this beautiful country not so long ago and those who do are still in for an incredibly eye opening and heart-wrenching experience.

After a heavy day in Phnom Penh, a nice escape to the quiet river town of Kampot, less than a three hour drive away, is a perfect wind-down. Here you’ll find…not much and that’s why people have been coming here. The town is clean and beautiful with plenty of great restaurants of all cuisines lining the riverfront street. A tourist favourite, Rusty Keyhole, is world famous for its ribs and is a must stop for any meat-lover touring Cambodia.

From town, it’s only a short ten-minute motorbike ride to Bokor Mountain National Park. Once in the park, the roads are newly paved and wind up the mountain creating an engaging ride and offering breathtaking views. Several abandoned buildings such as the church and casino are popular stops and if you’re lucky enough to go on a clear day, you can see all the way to the coast from atop the mountain. Get down to the other side of the river before dusk and you’ll be treated to one of the most beautiful sunsets this country has to offer.

Take a boat ride down the river and after crossing the train bridge, you get a peak in to rural Cambodia where bungalows just barely peak out from the jungle which lines the banks on each side of the Praek Tuek Chhu river. Every time I travel down that river I imagine myself living a beautifully simple life there someday, where I can relax and grow old with good friends while my dogs happily run around. When you’ve had enough chilling, head south to the beautiful coast and prepare for the sun. The southern beaches promise something for every type of traveller. Backpackers come here in droves, some of them for months or years at a time, to enjoy the simple and easy lifestyle that this part of the world has to offer. Here, there are no shortages of places to chill, but also plenty of parties to check out if you’re keen. Sihanoukville is home to the notorious Dolphin Shack Pirates Booze Cruise and the much talked about weekly jungle party, Kerfuffle, which is a must hit for anyone looking for an alternative to the top 40 club tracks that seem to be par for the course in most Southeast Asian cities. Don’t go too early because the party doesn’t start kicking off until about 3:00 am. Stick around for sunrise as it’s a wonderful site and arguably when the music is at its best.

If you’re free on a Saturday, Otres Market is a popular live music venue that offers backpackers a completely different atmosphere than normally expected while travelling through this part of the world. Don’t get the wrong impression because although there are food and vendor stands at Otres Market, the roughly two to three hundred weekly attendees are there for the live backpacker performed music, the company of good people and of course, the drinks. Try a shot from the Absinthe bar and get a taste of a spirit distilled right there, in Otres Village.

Otres beach is a popular “hippy-haven” and a breath of fresh air from the hectic rowdy nightlife on Serendipity beach. Both have their merit and it’s just a matter of finding your vibe and kicking it on the beach that suits you best. Give yourself some time down south because the nearby islands have just as much appeal to keep you around longer than expected. 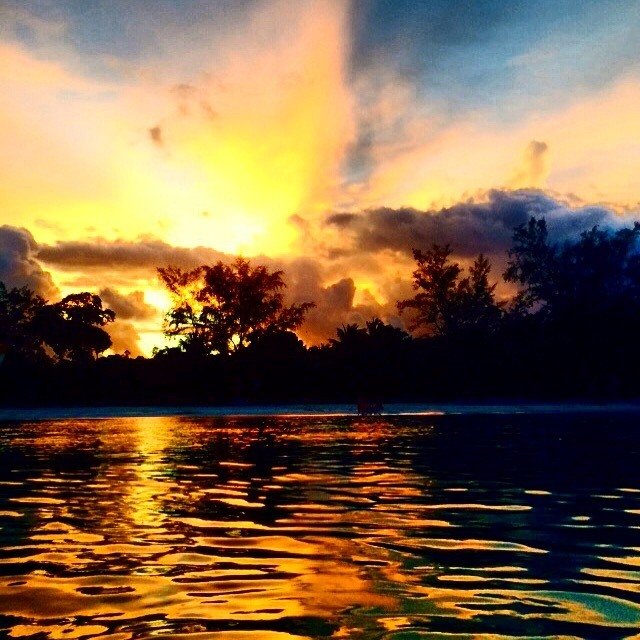 With Koh Ta Kiev, Koh Rong and Koh Rong Sanloem no more than an hour ferry ride away, you won’t need to deal with much travel time to see new destinations. There’s much debate as to which island is best and again, it depends what you’re looking for. But even though Koh Rong is most popular, many travellers rave about Koh Rong Sanloem’s relatively untouched landscape, brilliant bioluminescent plankton and laid-back atmosphere that made Koh Rong so popular in the first place. 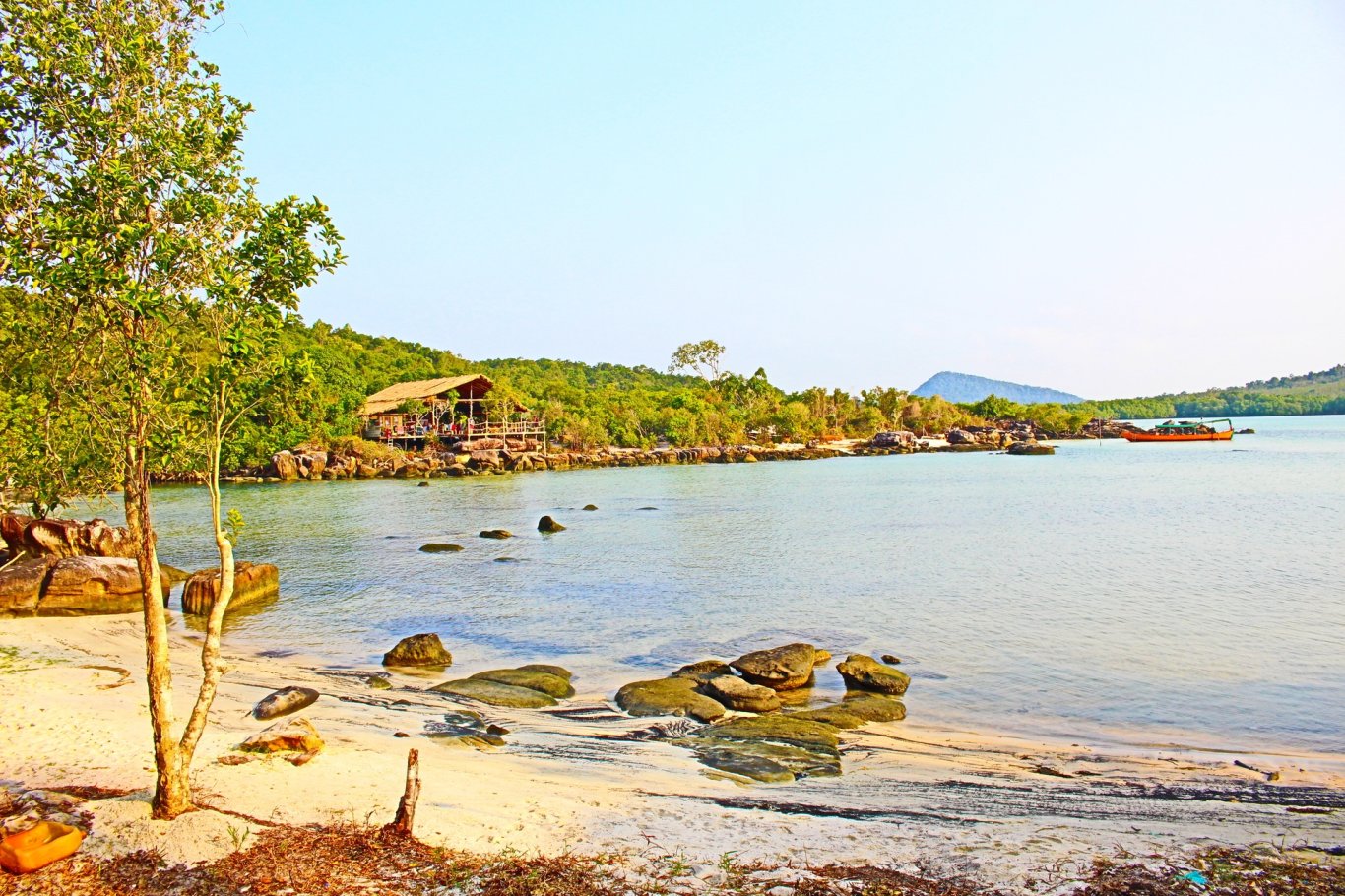 Saracen Bay stretches wide with white sand and clear water and a tide so volatile that the size of the beach varies drastically between morning and night. There still isn’t much of a nightlife on this island but since The Mad Monkey opened their hostel between Saracen Bay and M’Pai Bay, it has offered budget backpackers the opportunity to experience this beautiful island with other like-minded people. It’s one of the only backpacker friendly places on the island and is a must-stop for at least a few daytime drinks, where you can chill on a pontoon in the ocean and swing in the water-hammocks.

From the beaches in the south, it’s a 12-hour drive up to Siem Reap, home of the incredible temples of Angkor Wat. The Angkorian Empire ruled most of Southeast Asia some 600 years ago and is responsible for much of the shared culture throughout the different nations in this part of the world.

Most young backpackers have only a couple significant memories of Siem Reap. One of them is obviously visiting the temple ruins that made Siem Reap the popular tourist destination that it is today and the other is a messy night of drinking on the infamous Pub Street. The popularity of Angkor Wat’s renowned sunrise and Siem Reap’s bustling nightlife has caused many to allow a night on Pub Street to accidentally roll in to a sunrise at Angkor Wat. I’ve been guilty of this twice already, but to really appreciate the sunrise and the several temple ruins sites at Angkor Wat, an early night is advised. The sun is hot and inescapable while exploring some of the temples and a hangover is a pretty terrible condition to deal with while walking up all those stairs in the Cambodian heat. 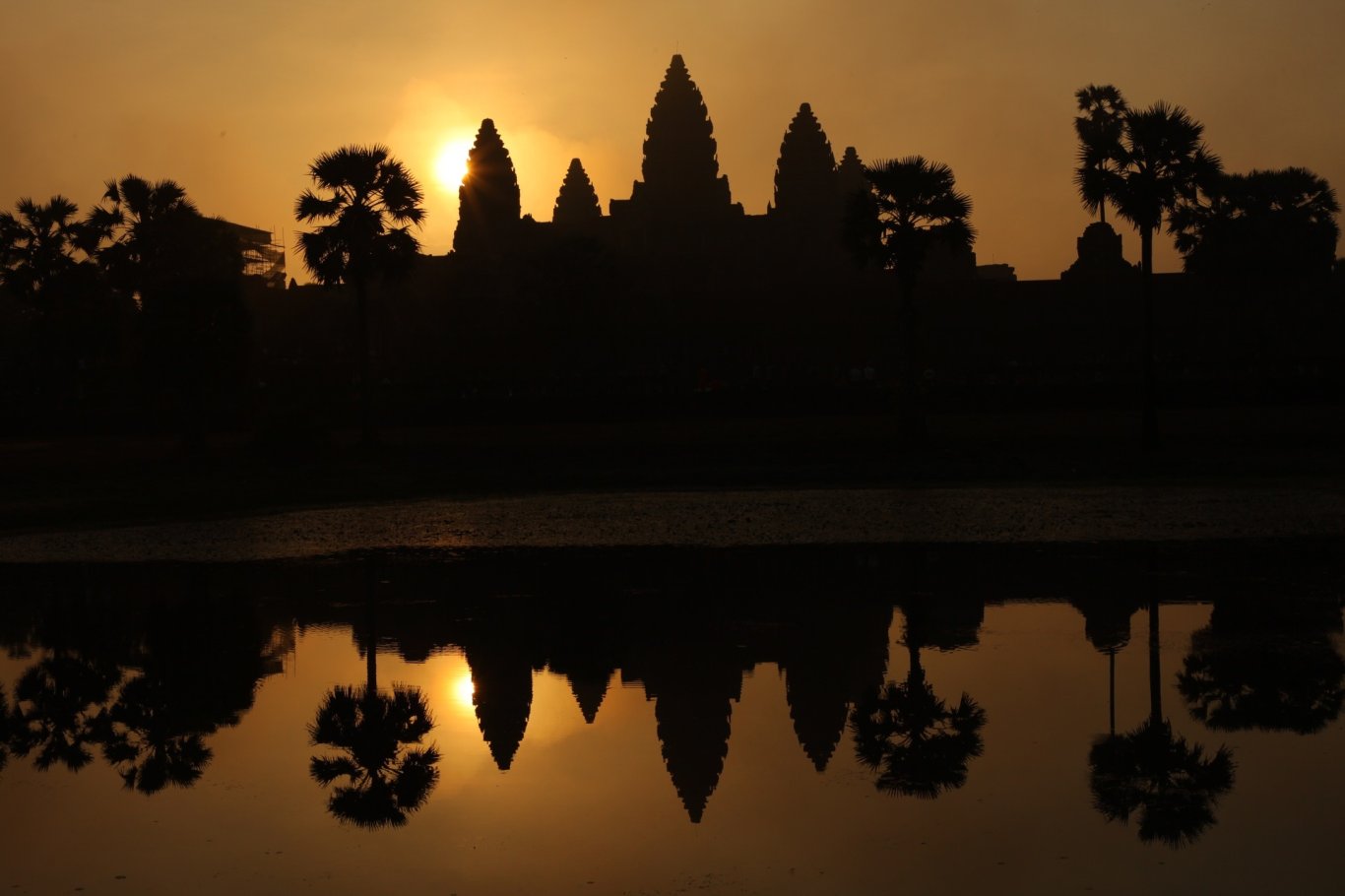 As you face the main temple just after 5:00 am when the gates open, the very same temple that the Cambodians fly proudly on their flag, you see but a faint outline of three towers. As the sun rises and the sky’s backdrop begins to contrast the temple, the towers slowly appear in the dawn. If you’re lucky, you’ll get a couple of clouds but not too many so that while the sky begins to change colour and light up the clouds behind the temple, it’s easy to see why this is considered to be one of the seven ancient manmade wonders of the world.

While inside the temple, beautiful works of art are carved in to almost every wall and pillar. The intricacy of these carvings and the shear size of a building this large is humbling. Without fail, every time I visit these temple ruins, I always imagine what an extraordinary site this would have been 700 years ago. How this civilisation managed to create impressively beautiful and massive buildings such as these without the use of powered machinery is mind blowing.

If you’re there by sunrise, you’ll be happy to leave by mid-day and try to catch some sleep if you plan to take on Pub Street later that night. Pub Street is Cambodia’s answer to Bangkok’s Koah San Road but not surprisingly, it’s probably closer to what Koah San Road was like in the 1990’s. Hit the bars at about midnight because things don’t get going until around that time anyways. Just as expected, buckets and beers are plenty and before you know it, you’ve woken up in your hotel bed with the vague memory of an epic night.

While the north boasts history and culture, the breathtaking south is paradise on earth. There’s a scene for almost everyone in this country and if you look hard enough, you’ll find a piece of Cambodia that you could call home, even just for a while. This place is everything I was looking for in Southeast Asia and so much more. Although I’ll always have a love for places like Thailand and Laos, Cambodia, it’s beauty and it’s people will always have my heart. 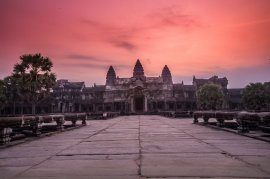