World Leaders Ranked By How Much Fun They Would Be Travelling!

With everything going on in the world and all the politicians in the news, it got us thinking… what would they be like if they went travelling? You never know, Angela Merkel might be the type to slap on some UV paint, drink copious amounts of buckets and dance til the sun comes up at Thailand’s Full Moon Party! Can you picture Donald Trump learning how to make paper lanterns in Hoi An? It's hard to believe these world leaders might have once had the same backpacker mentality as the rest of us. Still can’t picture it? Here's how we imagine it! Who knows you might bump into some of this lot taking a holiday (except Trump, that dipshit is more likely on the beach in a golf bunker thankfully).

We've all met one of these when we've been travelling. That really annoying wanker that thinks he knows it all, he's always got a better version of your own story and thinks everything is one big competition. Loves a name drop but wants to spend most of the time talking about himself. He prefers to stay in hotels rather than hostels which, to be honest, does everyone a favour.

Moans about fucking everything! The water is too cold, the sun is too hot, there are too many mosquitos, the rooms aren't clean, the journeys are too long, the drinks are too expensive, it's draining! But you put up with it because he is funding the trip with mummy and daddy's credit card. He's a terrible wingman, zero banter and is a really loud snorer. Pretty much turns the entire room against him wherever you go.

There's always one dickhead with a guitar, and this fella is it. Fancies himself as a bit of a ladies man but comes off way too cheesy. He loves a story about himself and reckons he's written songs for Ed Sheeran. An absolute tool. Put it this way; you would avoid sitting next to him on a night bus that's for sure.

Mr Consistent. Loves an early morning start and will always get stuck in whether that's building the tents or making the potato salad. He's one you can count on in the group to hold onto the whip money or make the decisions for all. Not the greatest on a night out though, usually in bed by 9 pm, even in a mixed dorm. Prefers a day drink while throwing a few shrimp on the barbie.

Plans every inch of her day from start to finish. She has a spreadsheet for everything and is very meticulous on what she spends her money on. She would much rather pay for experiences than accommodation so surprisingly doesn't mind roughing it a bit from time to time. Camping is her favourite, hates beaches and not a fan of swimming.

He's that typical hippie guy you meet when travelling. Smokes weed all day, doesn't agree with deodorant, loves the earth and wears clothes that wouldn't look out of place on the homeless. He's always got a good story to tell though and is pretty well travelled. Prefers to sleep in a hammock on the beach rather than pay for a hostel. Loves a drink! Full moon party is his thing followed by Eden getting high on Mushrooms!

Fucking loves a night out! I once heard a story that he used the country's top architects to build a replica of Ibiza's Amnesia club in his back garden just so he could rave when he wants (or did I make that up?). Either way, you know that would be the last on the dance floor, in your ear for the shots and chasing those balloons. Problem is, he's proper mean on a hangover and may decide to have you killed if you disagree with his choice of breakfast. Getting a balance with this guy might be tough, but the pros definitely outweigh the cons.

We’ve definitely all met these types of backpackers on our travels, right? Needless to say, we are joking, just in case, someone takes us too seriously. ;-)

For more fun, positive reading, check out our Fucking Good News blog and say goodbye to your newsfeed being constantly filled with the C-word (COVID)!

Can’t decide which Thailand trip to do? Complete it all on this legendary journey!

Heaven for all types of travellers! From waterfalls to surfing, temples to sandy beaches, explore the best parts of Bali here.

Dive into the diverse Sri Lankan culture, set off on a safari, climb Sigiriya rock & check out the breathtaking scenery.

Learn More
More please! Sign up to our newsletter 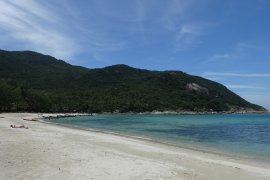 Our New Trip, our 3rd Birthday and our 1000th TruTraveller
X
Our website uses cookies to ensure you have the best possible experience and to deliver epic content specific to you. We also share info about your use of our site with our social media, advertising and analytics partners. By continuing to use our awesome website, you consent to our us of this technology. Have a read of our Privacy Policy to learn more.
I'm OK with this Cookie Settings ?