10 Top-Secret Truths from a Flight Attendant

10 Top-Secret Truths From a Flight Attendant

Before I joined the wonderful world of TruTravels, I previously worked as a flight attendant for a major international airline. I spent my days gallivanting across the world to the Maldives, the Caribbean, Las Vegas. All the holiday hotspots and a fair few airports I'd never even heard of. Still, here I am dropping 10 top-secret truths and setting straight some common questions from my 3 and a half years flying!

10 Top-Secret Truths From a Flight Attendant

Before I joined the wonderful world of TruTravels, I previously worked as a flight attendant for a major international airline. I spent my days gallivanting across the world to the Maldives, the Caribbean, Las Vegas. All the holiday hotspots and a fair few airports I'd never even heard of. Still, here I am dropping 10 top-secret truths and setting straight some common questions from my 3 and a half years flying!

1. It's not all that glamorous.

Sure the idea sounds great. You see those films with stunning cabin crew walking through the airport arms locked with a handsome young pilot, but in reality, that's not really it. There are definitely some wild nights, parties down route on trips and plenty of beaches. Still, there's also a fair share of creepy old men, slot delays, planes going tech and medicals onboard which I can confirm are not glamorous at all.

2. Can you go in the flight deck/ cockpit?

Yep! Well, if you ask nicely. Normally after take-off, you can pop in and say hi to the pilots and maybe even snap a few photos (If you get one of the nice ones). Still, cabin crew will spend time in and out of the cockpit throughout the flight and will sometimes sit in the 3rd pilot's seat for landing to catch insane views. Winner!

3. Do the pilots and cabin crew really get it on? Is the mile high club a thing?

Short answer, no. Not really. I mean, you might find a few cabin crew being a bit flirty to get those expensive cocktails at the bar, but ultimately It's not really thaaaat common, but the mile high club is actually a thing. Logistically how it works in the tiny grim toilets, I have no idea.

4. There's A LOT of security and knowledge checks

Not surprising given the job role, but cabin crew are constantly quizzed on security and knowledge. Before a briefing for a flight, the crew will be asked quick-fire questions in regards to pilot incapacitation, a fire breaking out on board, ditching into water or medicals from heart attacks to seizures and how to deal with them if you don't answer correctly. Sorry honey, you're not operating that flight. Unpack that bikini you're not off to Barbados. It's pretty intense.

On all long haul flights, cabin crew and pilots will take a break. If you're super lucky, you'll get a 'bunk' which is just a flatbed with a pillow and a curtain. You usually have 2 choices: a 'side bunk' or a 'coffin', neither of which you can sit up in, but when it's 5am on a 12-hour flight across the Atlantic, they're pretty much as good as anything. Bunks are normally located behind a secret door and up a few stairs.

6. Why are planes so goddamn cold?

This is for a few reasons, but normally temperatures should stay at around 21 degrees mainly because anything above people start to faint (trust me, this happens most flights). Although the flow of air throughout the plane makes 21 degrees feel more like 15 degrees, and if you're sat near a door, that suctions gonna freeze ya. Soz, that's the price you pay for extra legroom.

7. Those chimes you hear are actually secret code for crew

Yep, there's a range of different noises and chimes you'll hear when on a plane. This could be crew calling from door to door to confirm they're locked and ready to go, to emergency drills and medical calls and passing this information on to the captain. Most of the time, it's just the cabin crew communicating with pilots about cups of coffee and down route drinks. Nothing too exciting.

8. We don't know where we are the majority of the time

If you ask us 2 hours into the flight where we are, 99% of the time, we don't know. We're not sat with a flight plan or route like pilots in front of us. Instead, we're worrying how the guy in 25J is going to be in an hour after necking 3 double whiskey and cokes and grabbing your shirt and calling you darling.

9. Why do I have to have my window blind open for take-off and landing, and why are the lights dimmed in the cabin?

Great question, and both the answers are safety. We know it's annoying, but your window blind has to be open for exactly that, your safety. During take-off and landing, both cabin crew and pilots are extremely busy and strapped into their seats which means passengers are the new eyes and ears of the plane. Basically, if something goes wrong outside, you'll see it first and alert the crew. This has proved to be the case in many accidents that have occurred during take-off and landing, so that makes customers kind of a big deal. The lights are dimmed to acclimatise your eyes to the outside surroundings; if something were to happen and you had to emergency evacuate or disembark, your eyes would already have adapted. Simples.

There are so many stories of code words for hot passengers; sure, we see them and talk about them. But, we'd rather just straight up say 'that businessman is 2A is kinda fine' than using some code word. We check you out to see if you're looking well, healthy, in a fit state, aka not hammered and who would be helpful in an emergency. We call them ABP's (able-bodied people), the sort of people who can help you throw a door off and help passengers down an emergency slide. You know, the important stuff.

There you have it, the inside scoop and travel gossip. If you enjoyed that one, there's still loads more tea to spill. Let us know if you want a part 2! Until then, check out or epic tours and

5 Reasons You MUST Visit Boracay 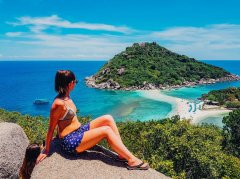 Travelling Therapy: Why It's The Best Thing For You
X
Our website uses cookies to ensure you have the best possible experience and to deliver epic content specific to you. We also share info about your use of our site with our social media, advertising and analytics partners. By continuing to use our awesome website, you consent to our us of this technology. Have a read of our Privacy Policy to learn more.
I'm OK with this Cookie Settings ?