At TruTravels we believe in giving back and doing our bit to try and address the equality divide that exists in the world today. We also really like to have a good time and party! So, we have decided to make our annual Christmas events to combine both.

Last year we did a big group Xmas mission and went to a school in Sanglaburi in Thailand where we raised funds, took supplies, school equipment and helped redecorate the school. We took around 50 of the TruFam and on the way back to Bangkok we stopped for a big overnight party on a massive houseboat.

This year we are mixing things up a bit! Instead of doing one big event, we have decided to do lots of different smaller ones in several destinations, to support multiple causes.

To support our mission this Christmas we would really appreciate any donations to be made on our gofundme page. Check out below what challenges we have done so far & stay tuned on our social pages for lots more to come! 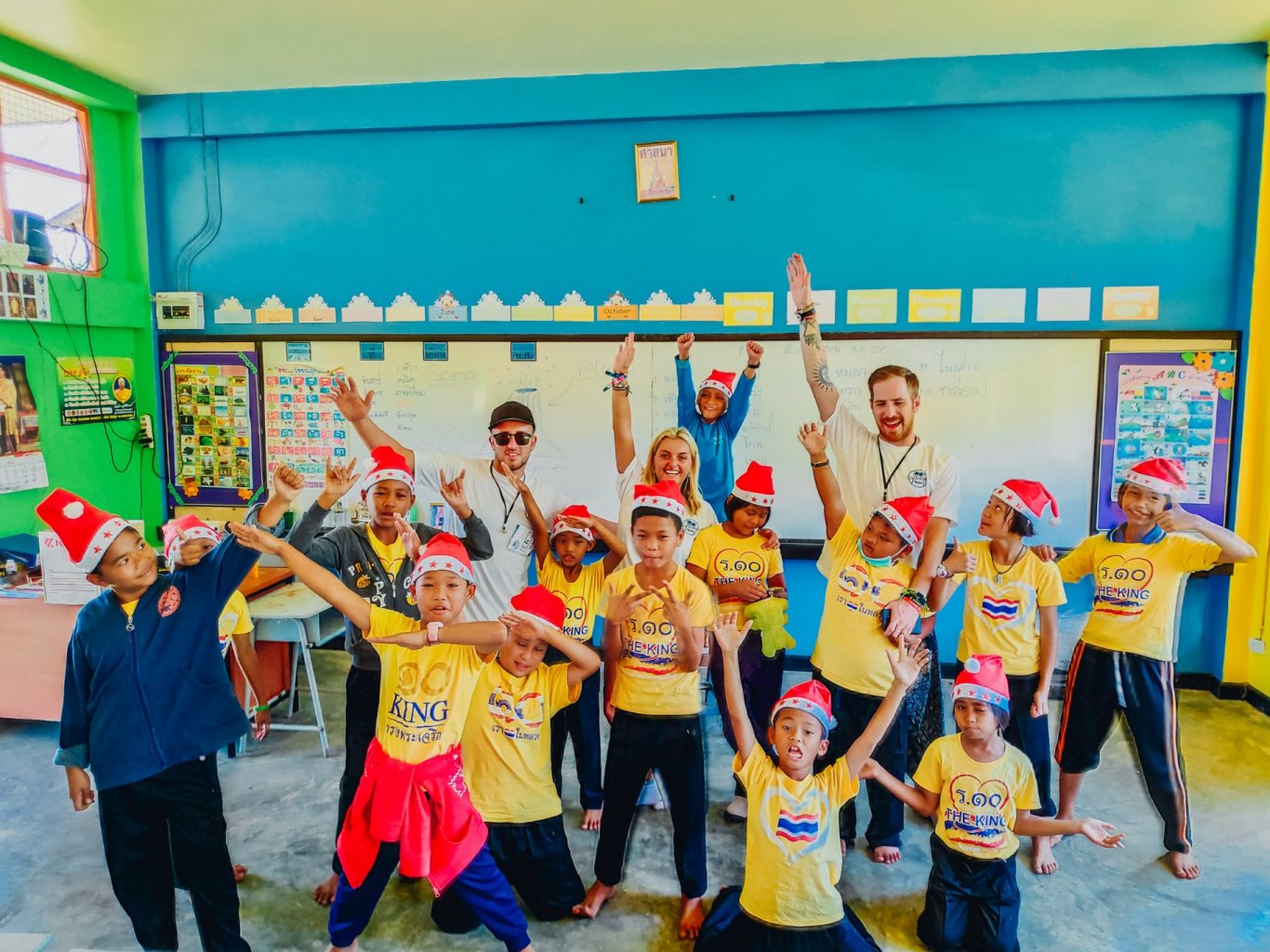 WHAT ARE WE DOING & WHERE?

Below are the pictures of a few of the girls helping out to put Christmas gifts together for 2000 unprivileged children in the UK. On the amazing Jason braved dying his hair bright red - at least the colour fits in with Christmas! 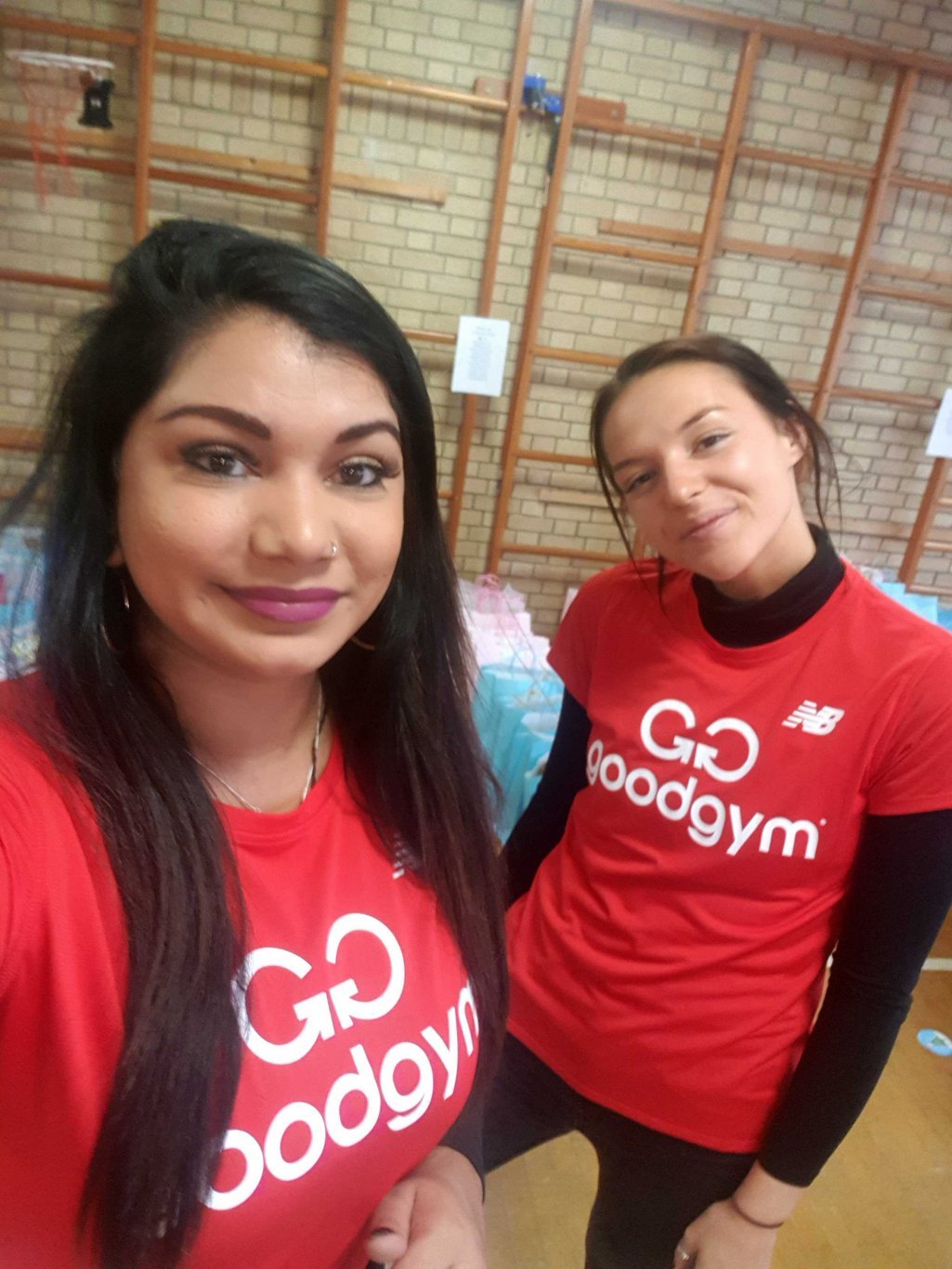 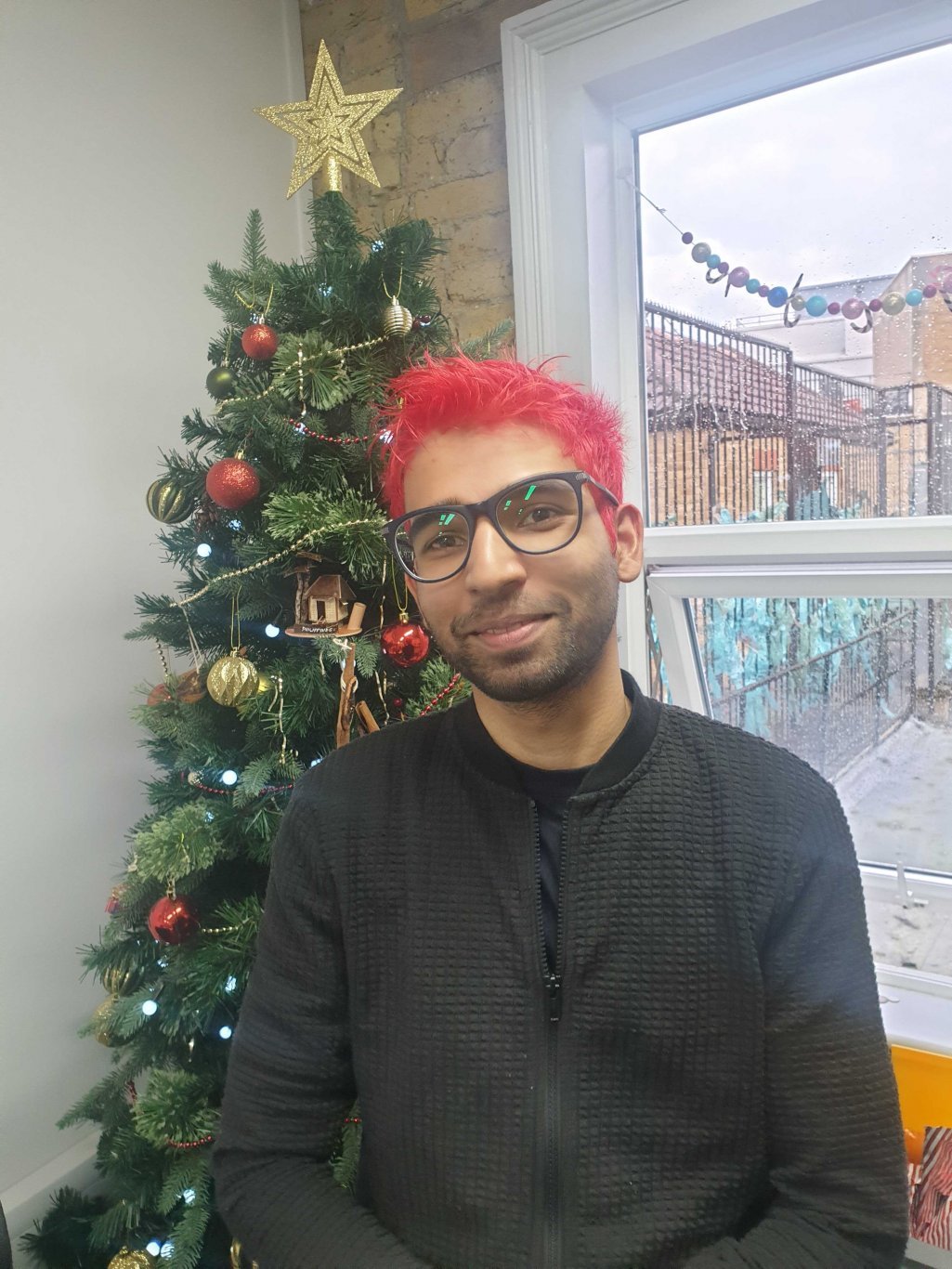 Dom and Heidi ran the Richmond Half Marathon on a very cold January Saturday morning. Despite only just getting over their festive activities, they both finished in under two hours which is pretty awesome!

The football fans of the TruCrew took part in the 'Womble to Wimbledon Walk' which involved a 28-mile walk taking in some of London's top football stadiums before getting to the final stop in Wimbledon by 7:30 pm in time for kick-off. 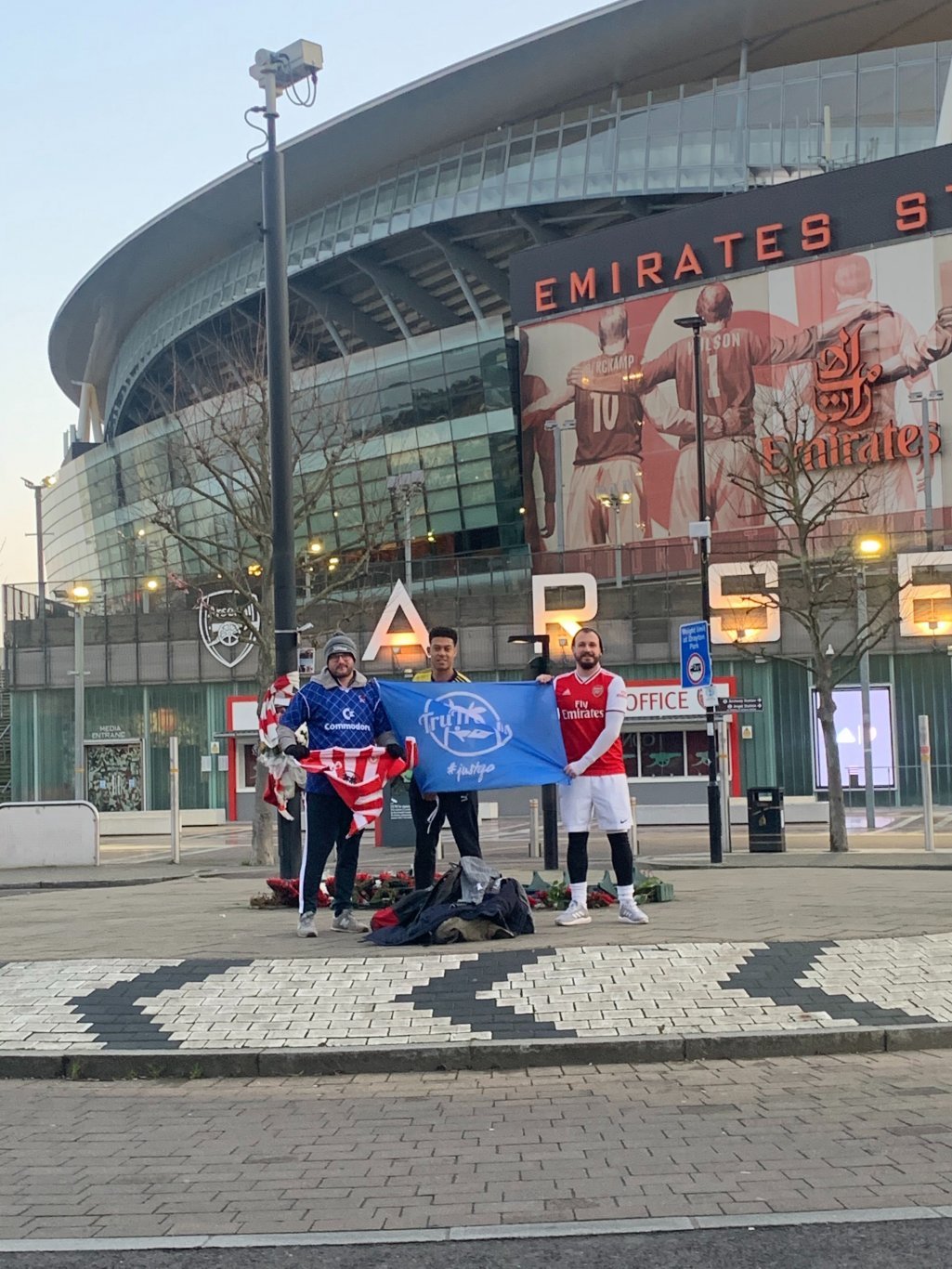 Our teams in Indonesia are raising money for the Gili Eco Trust, an organisation dedicated to removing and recycling plastic waste from the island's beaches and oceans. We've also had many of our group's travelling in both countries get involved, which has been amazing as well as even more beach clean-ups from our legendary group leaders. They set the bar high raising over £1000 with initiatives like Amer shaving his head for donations (if you know him, you will know what a big deal this is for him!) which raised over £500 alone! 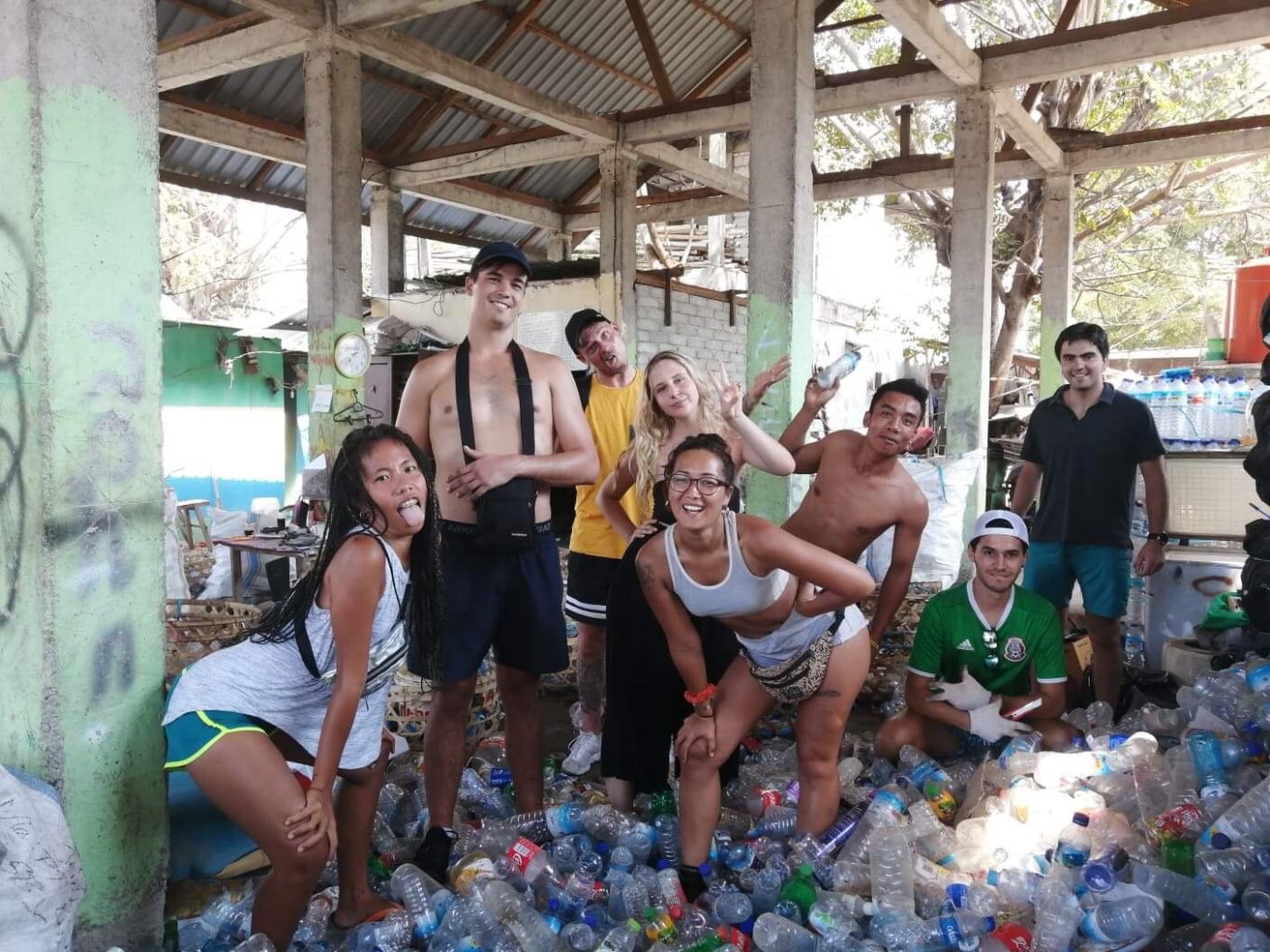 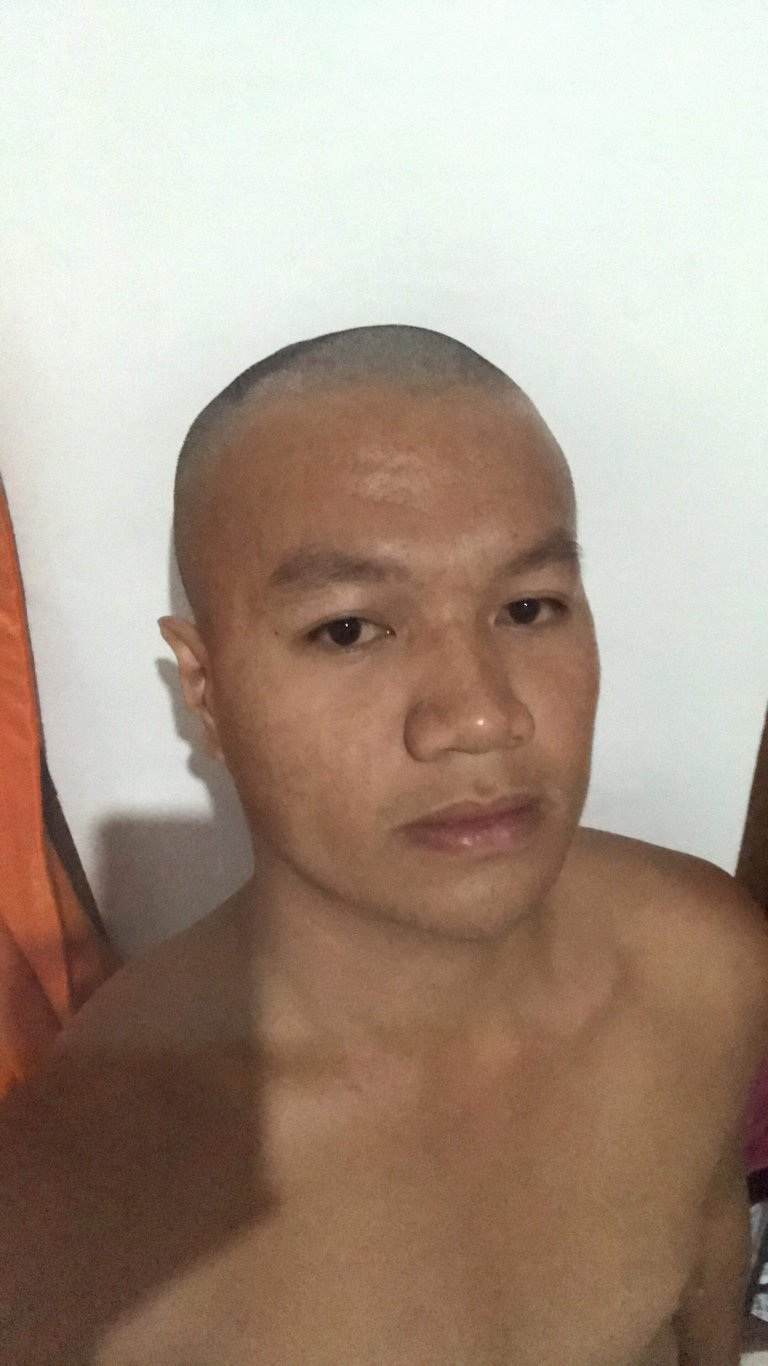 The boys in Bali took part in a mammoth triathlon; from running, swimming and cycling - all of your support from this challenge has been greatly appreciated. 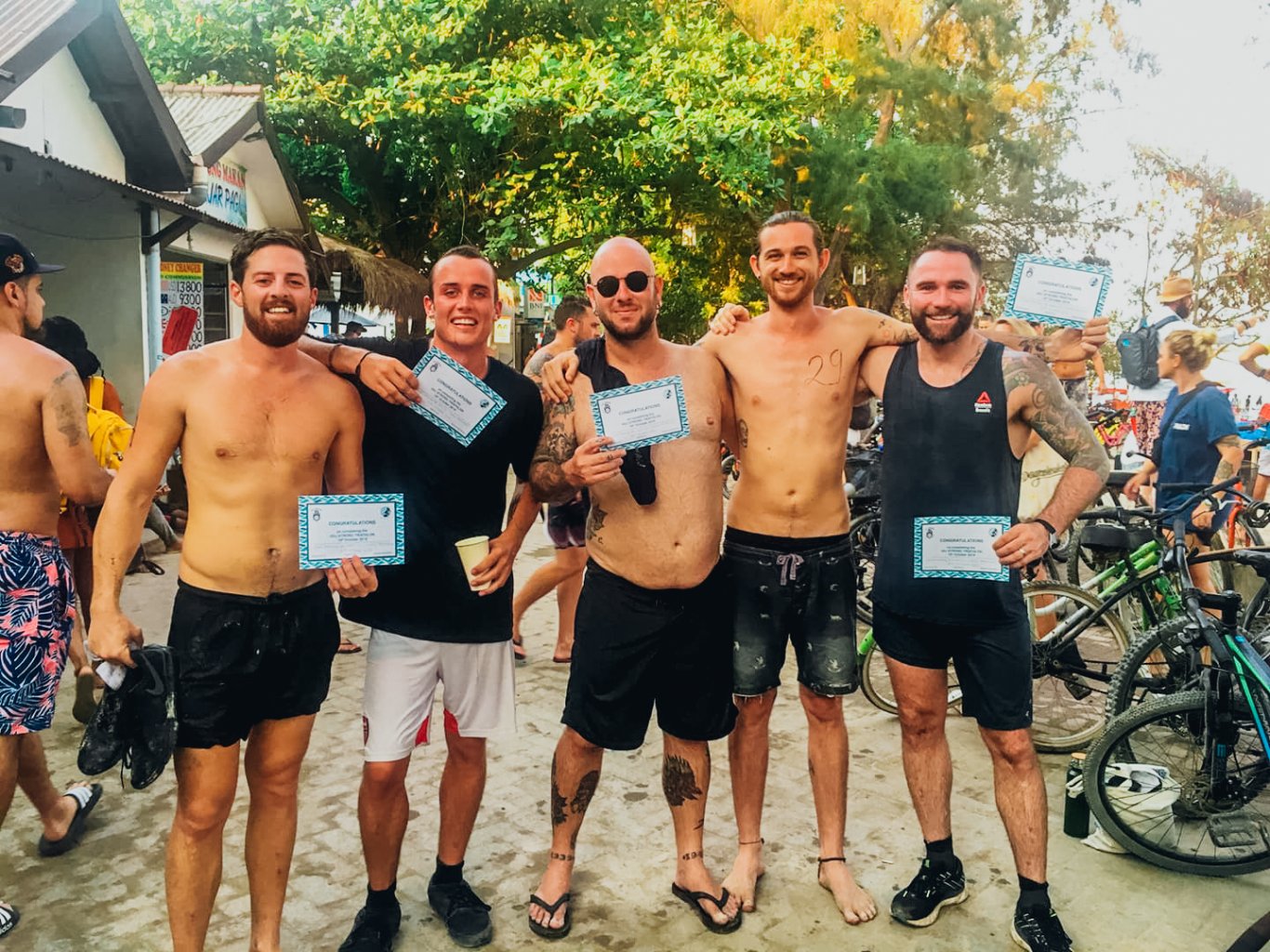 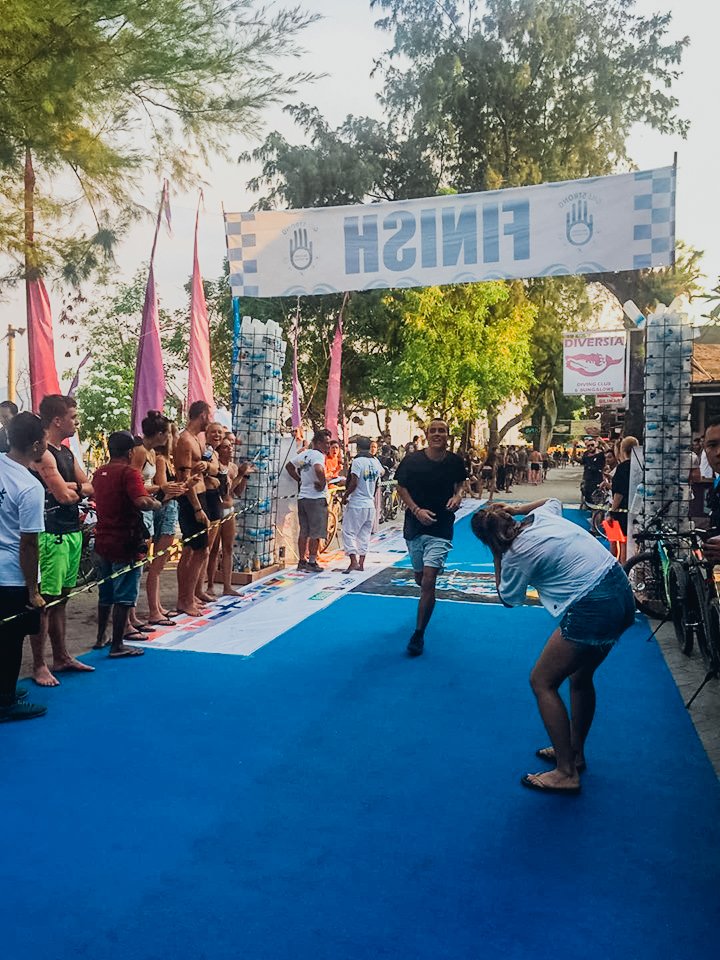 They also held an epic fundraiser pool party for Gili Eco Trust on 18th October which included selling eco-friendly products, getting tattoo's to raise money for the charity, to a massive beach clean up! The party was a huge success in raising an incredible £402!
The Indo crew also hosted an awesome pool party at Mad Monkey Gili T in December to raise money for the Pituq Foundation! They support the victims of the Lombok earthquakes last year as there is still much work to do and many people who still need help. Our Christmas themed party had a live DJ, raffle prizes, community beach clean, Xmas special shots, products for sale (100% of profits went to the charity!), Christmas glitter makeover, cool festive vibes and even a Santa drinking race. Many of our leaders bought their groups down, and it was an amazing event with all the TruFam! 20% of all drink and food sales went to the charity, and we raised just over £310 which will help provide many villages with clean drinking water, as they don’t have the facilities to boil it and can’t afford to buy bottled water! 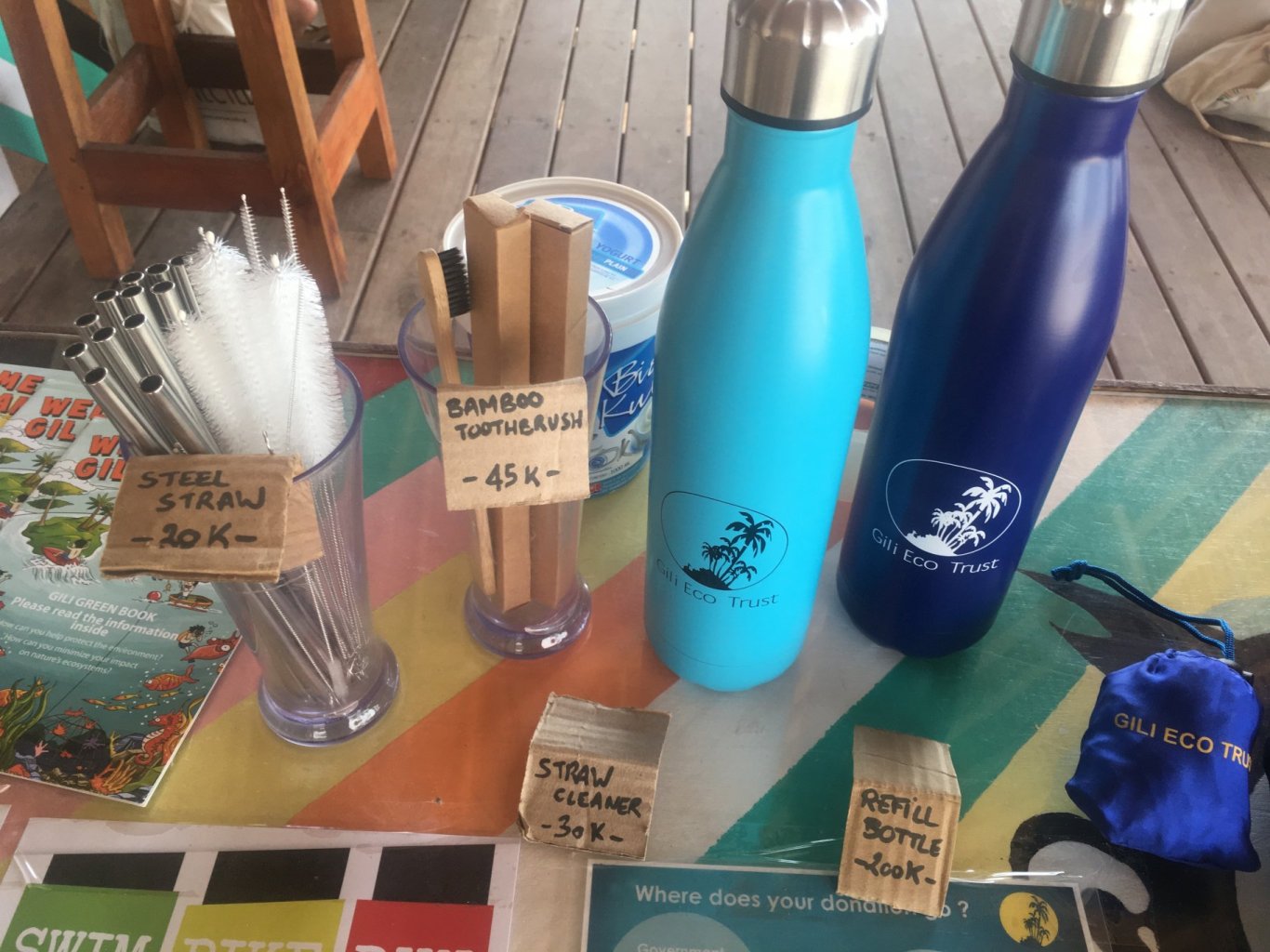 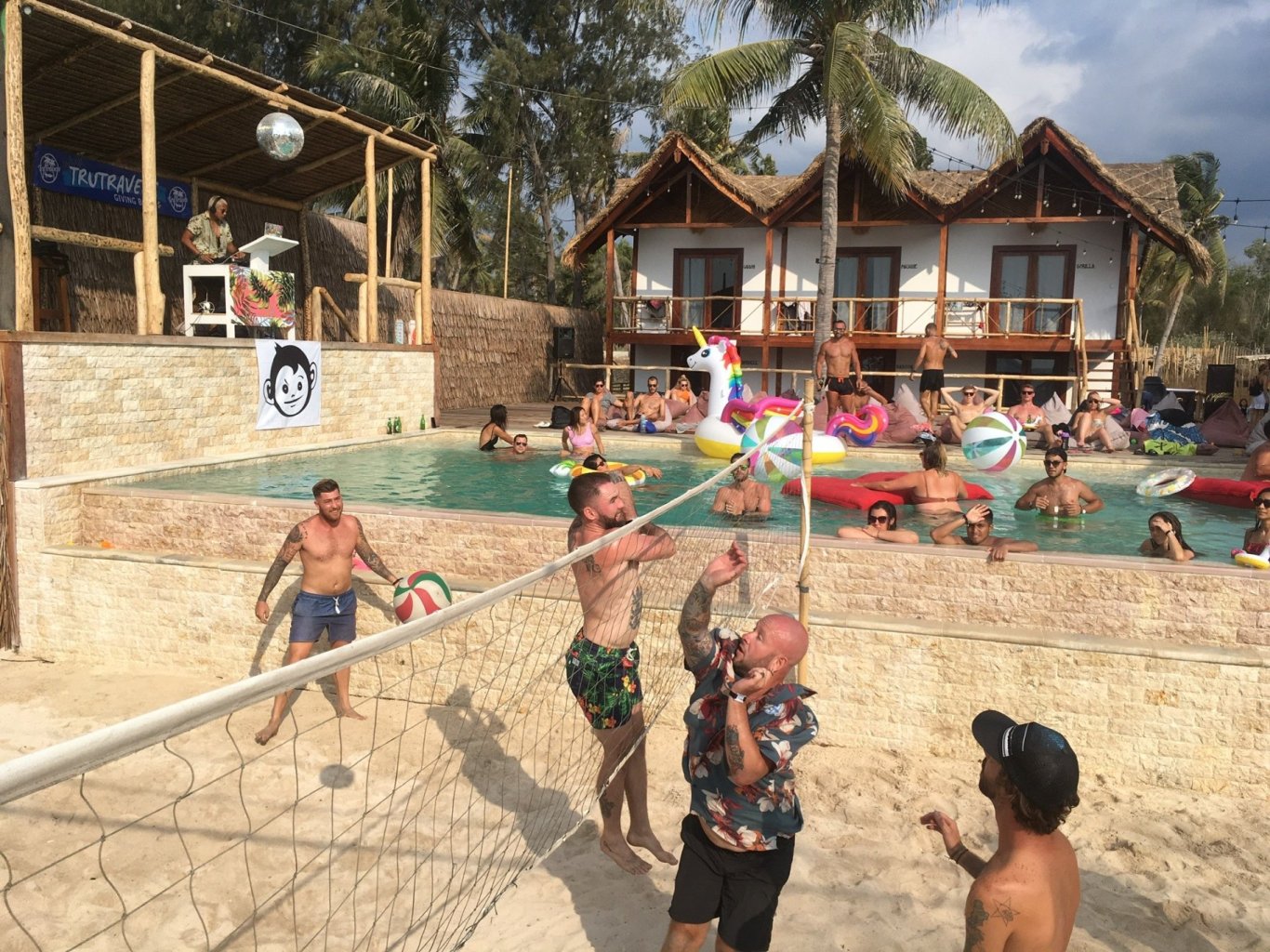 It doesn't stop there with the crew in Indonesia! Phoebe Freddie and Dan spent a couple days taking on the Dams Rinjani volcano hike. It wasn't an easy walk as on route they came across a forest fire on the mountain during the night so had to quickly move! However, they managed to move their camp and finish the hike the following day where the epic sights made up for their dramatic events. 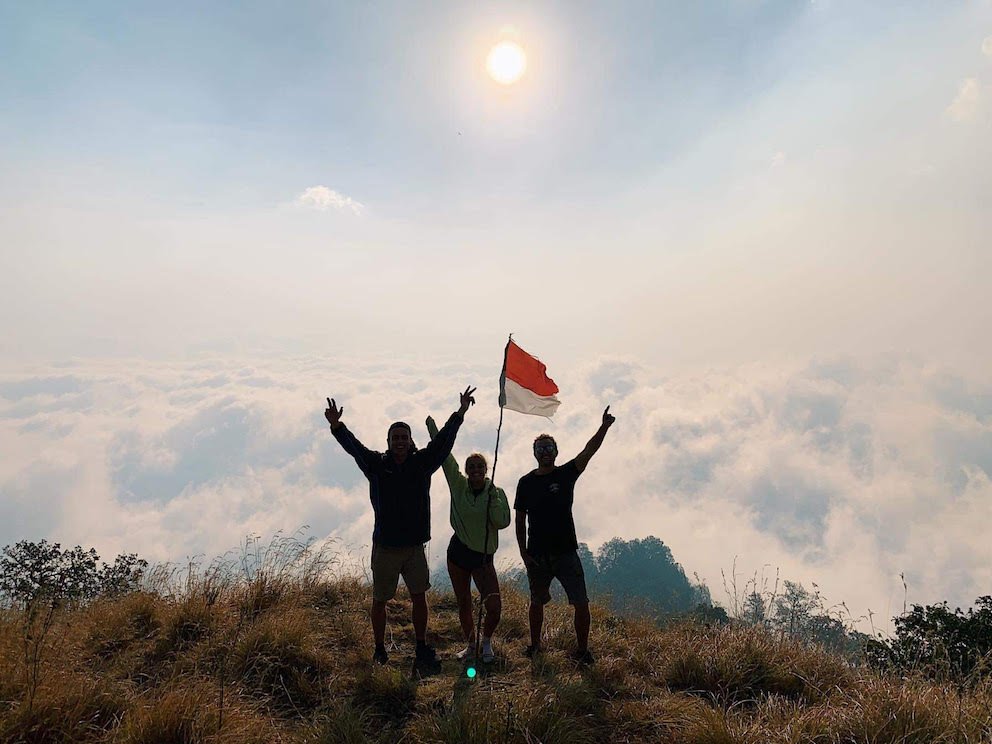 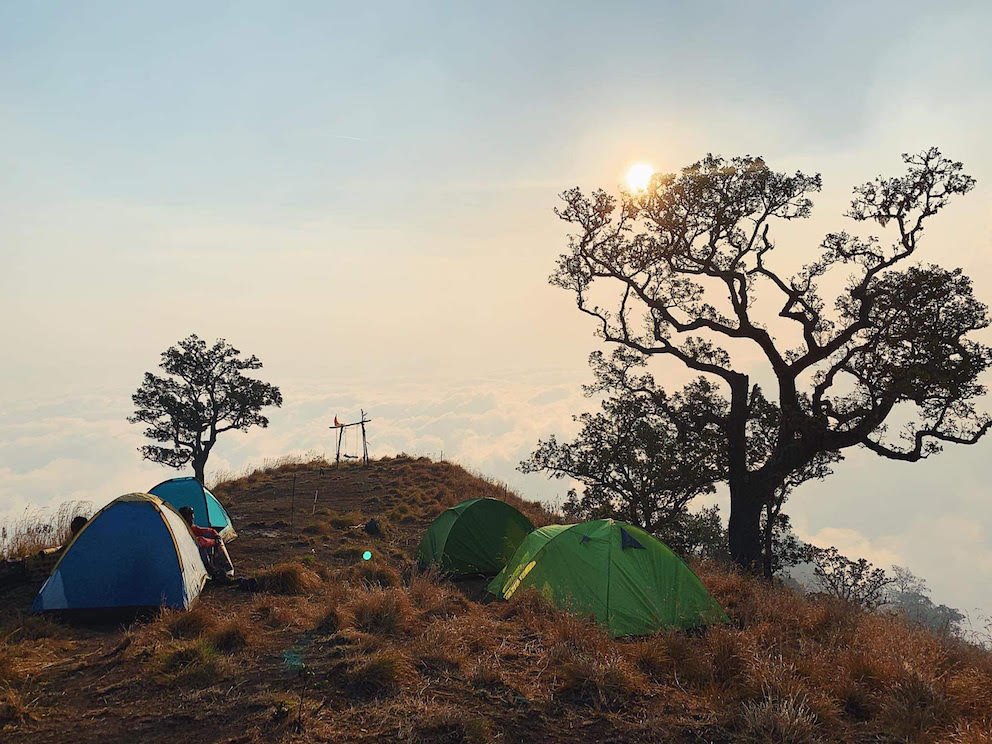 Our legendary TruBabe Rianna is taking on 10 beach cleans across Gili T to help keep the island plastic-free and beautiful, and to prevent and manage waste on the island left by businesses and tourists. So far she has done 7 and there will be lots more to come!
One of our group leaders Eman paddle boarded around the whole of Gili T and picked up plastic along the way. It was bumpy 4 hours going against the current to get around the island, with even being accompanied by some sharks at one point!
Many of our Philippines groups have also joined in and took part in beach ups, below is one of our groups cleaning up along Port Barton Coast! 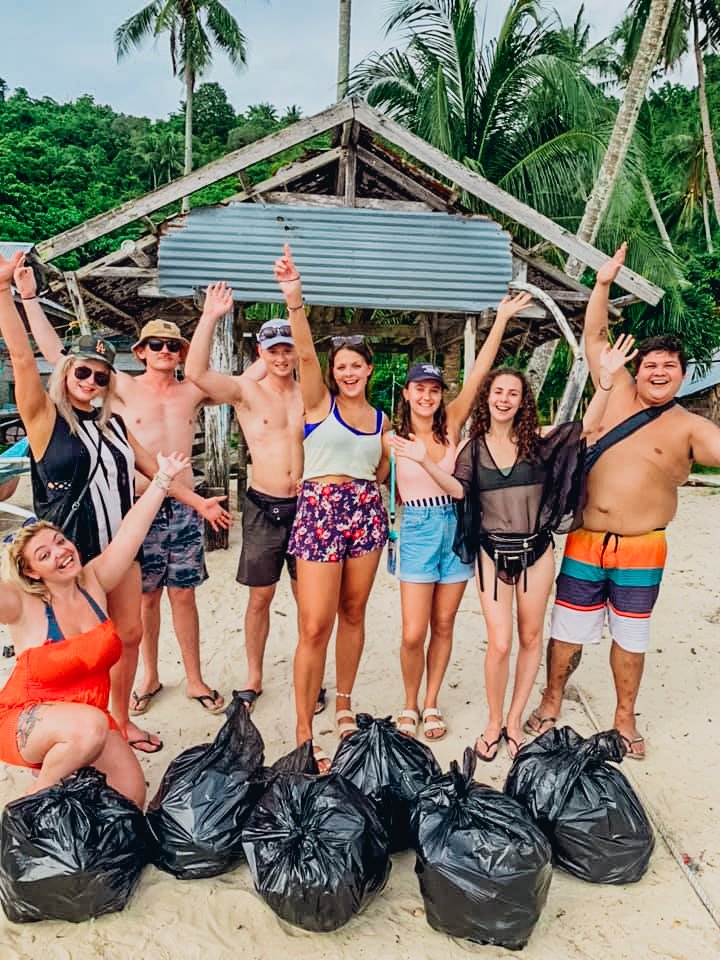 On 19th December, the TruCrew in the Philippines held a fundraiser pool party at the Hill Side Resort in Siargao. All proceeds from the event went to Siargao Masaya, a non-profit NGO who support the poorest of families of Siargao Island. From local singers coming to playing their favourite songs, a big raffle where local businesses donated prizes, and of course food and drink throughout the day, despite the rain, the event was a huge success! Big love to everyone who supported us - in total the team raised £421 which is really awesome. The TruCrew also joined Siargao Masaya's mobile library, where they read the local children stories, held an art session (definitely saw some up and coming Picassos), as well as singing some of the best Christmas songs at the top of their voices. There's no Filipino party without Karaoke, that's for sure! In Thailand, the crew will be doing it “for the pups!” and raising money for a cause close to a lot of our teams hearts: PACs or Phangan Animal Care for strays who do a fantastic job treating stray cats, dogs, monkeys, birds and any other animals who are injured, sick or in need of TLC, as well as attempting to control the population of strays on the island with much-needed sterilisation programs. 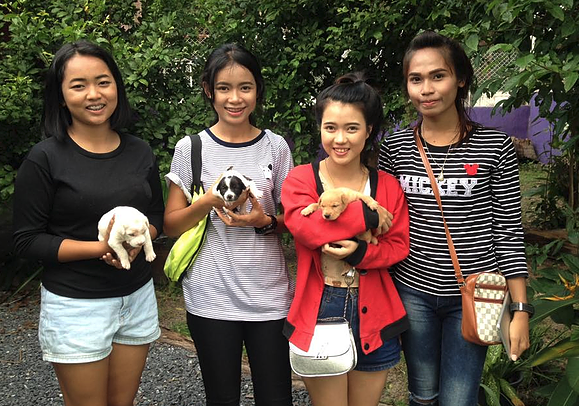 So far the crew in Thailand have held a pool party fundraiser at Mad Monkey, on Koh Phangan. They put on a raffle, sold cool cocktails where 50% of profits went to PACS and a clothes sale where 100% of profits were donated to PACS. Overall they raised nearly £300 for the pups and held a kick-ass party! The crew are holding another charity Full Moon event on 11th December so we would hugely appreciate as much as support on our GoFundme page as possible! 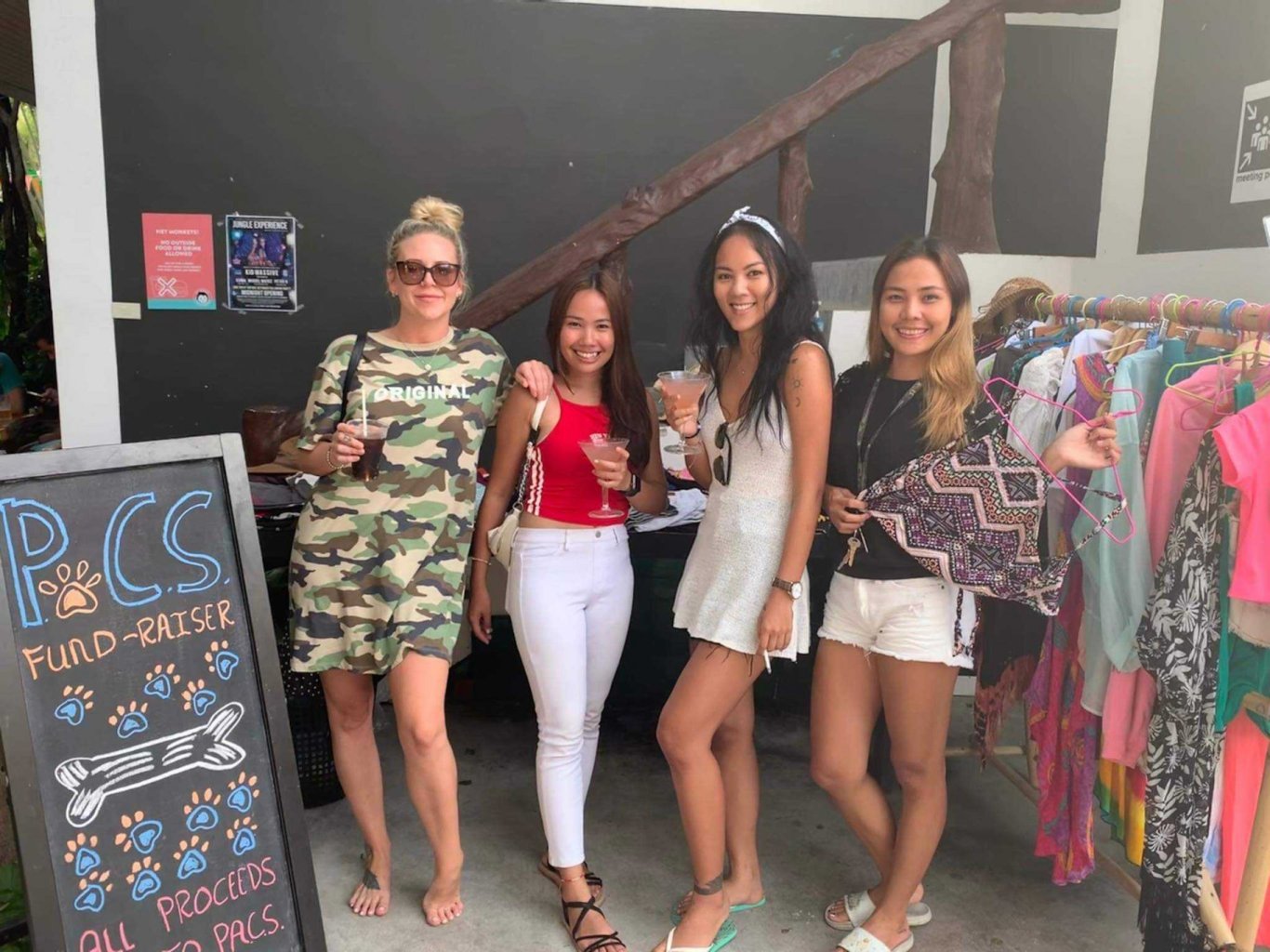 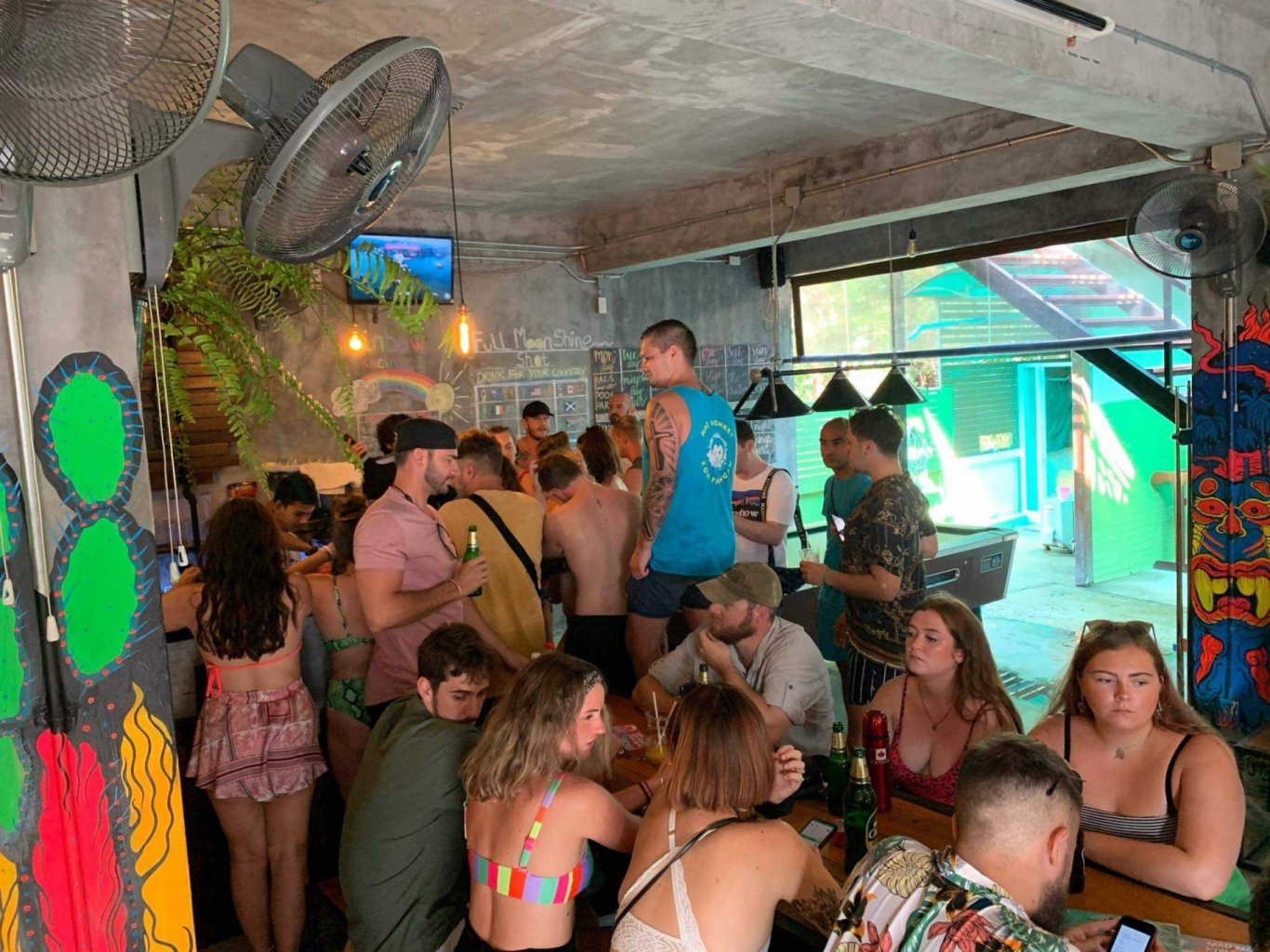 Our Tru Legends Joe and Gam ran the Angkor Wat Half Marathon on the 8th December and completed it in an amazing time of 1hour 46mins! The training paid off & a big thank you for all the support given. 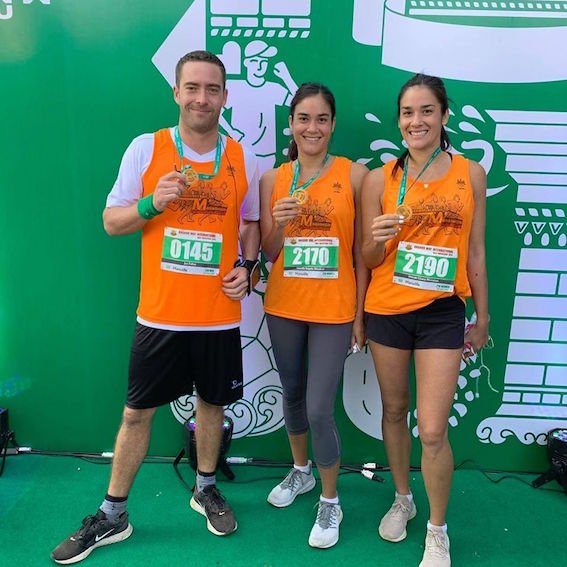 Our legendary group leader, Dean, in Sri Lanka is braving up to do a back, crack and sack wax to raise funds for not one but two charities (PACs in Koh Phangan and Animal SOS Sri Lanka) that helps rescue dogs in need. His individual aim is to raise a massive £500 so if you would like to support Dean with the brave challenge which will go ahead mid-December, you can share the love and donate here. Remember to comment on his name when you donate! 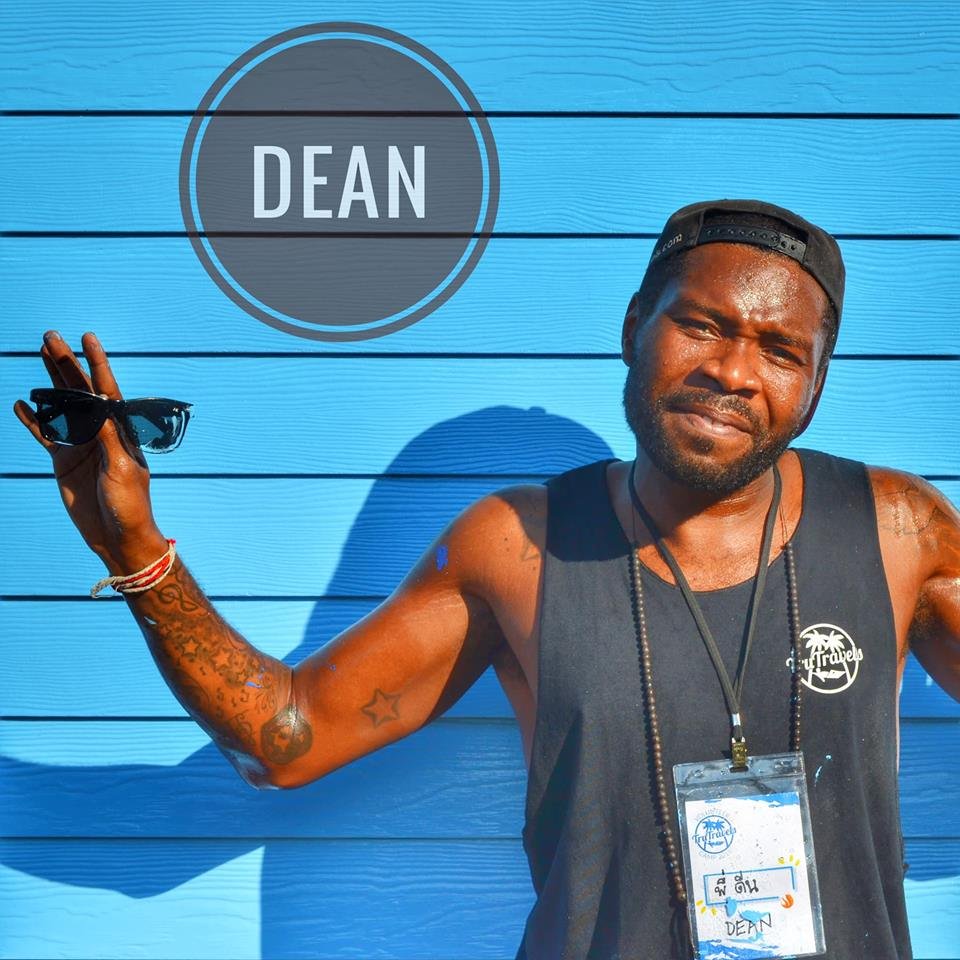 The crew in Laos, Cambodia and Vietnam will be raising money for the Cambodian Buddhist Association for Vulnerable Children to support their freshwater program and build wells for villages and families without access to safe drinking water. This program has already done a huge amount of good so far and goes way beyond just providing fresh water. Read more here.

On 9th-12th December the crew across Thailand, Vietnam and Cambodia went over to Siem Reap to build two wells with the money they had raised from their Christmas challenges. It really does show that every penny and challenge counts to help these incredible causes - building these two wells has now meant 100 locals are provided with fresh and clean running water, which is awesome!!

The crew in Cambodia and Vietnam will also be doing city cleanups in Hanoi, Hoi An, Siem Reap and Phnom Penh on Saturday, November 30th in support of the Cambodian Buddhist Association. Building wells in Rural Cambodia helps vulnerable children for villages and families who otherwise would not have access to clean water. It only costs $310 to build a well which gives 50 people a clean water supply, making a huge difference in their lives. Check out this link to San Van, the president of CBAVC, a Buddhist Monk and all-round top bloke, explaining a bit more about what they do.

Every penny counts to help this amazing cause and a donation from you supports keeping the places we live in clean while also helping build wells in rural Cambodia.

Our amazing BDM in Australia, Matt Connell, will be taking on an epic gym triathlon! Each day he'll row 500m, Bike 7.5 km, run 1.5km every day for a week - we are not sure why we put himself up to this challenge! 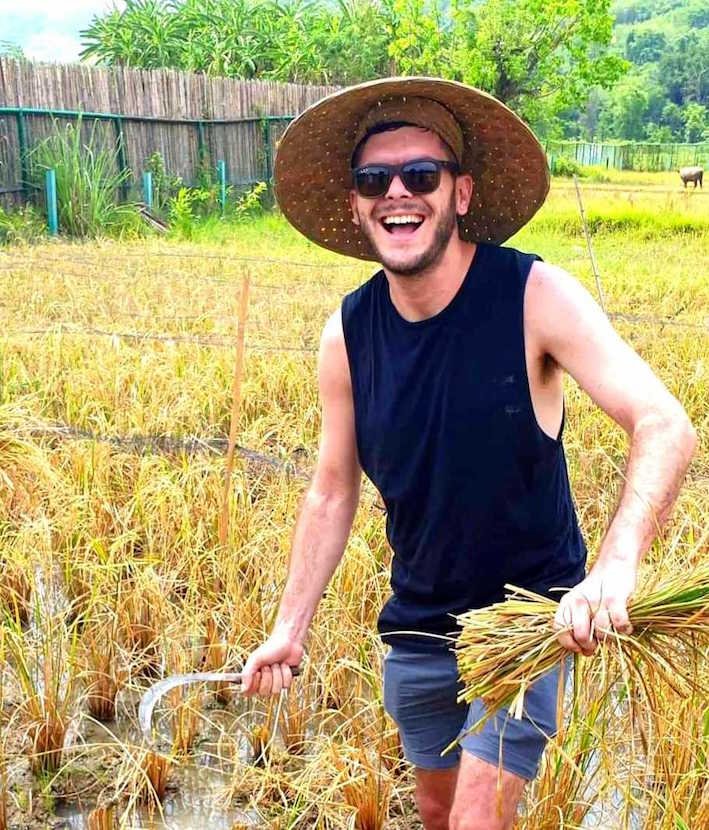 Stay tuned for all our challenges as we post over the coming weeks and head to our gofundme page to support us! Every little helps and every don hugely appreciated.

PACS – Phangan Animal Center for Strays - Volunteering
X
Our website uses cookies to ensure you have the best possible experience and to deliver epic content specific to you. We also share info about your use of our site with our social media, advertising and analytics partners. By continuing to use our awesome website, you consent to our us of this technology. Have a read of our Privacy Policy to learn more.
I'm OK with this Cookie Settings ?